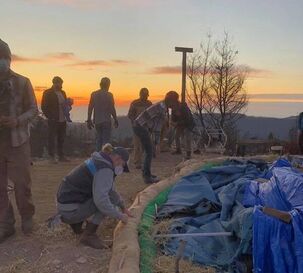 ​This event is free to view, however a $20 strongly suggested donation will go towards CoRenewal's post-fire water protection initiatives.​ ​
With the rise of catastrophic megafires in California, there is a growing concern about post-fire toxic ash from wild/urban interfaces, and the consequences of this toxic ash-runoff entering the surrounding waterways. In response, there is a growing grassroots network that seeks to mitigate erosion, remediate toxins, and support post-fire ecological regeneration using fungi and other microbes.


CoRenewal's Post-Fire Biofiltration Initiative (PFBI) is working to evaluate the efficacy of fungal inoculation, with the aim of developing widely applicable tools and methodologies to facilitate ecological regeneration and recovery in the aftermath of disaster and environmental injustice. In this participatory webinar, we will discuss how you can organize and participate in post-fire watershed protection efforts, as well as how to contribute to community science that supports future efforts. 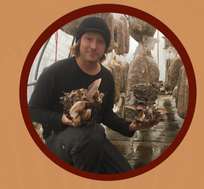 Cheetah Tchudi
Butte Remediation Farmer, Consultant, Citizen Scientist
Cheetah Tchudi has been working in the fields of agriculture and mycology for over 15 years. While working on farms and ranches, Cheetah completed his BS in agro-ecology and mycology from the Evergreen State College in Washington State. While working on his undergraduate degree, Cheetah completed his first grant from Western Sustainable Agriculture Research and Education (WSARE), in which he tested mushrooms as a method of generating on-farm fertility from woody agricultural byproducts. Starting in 2008, Cheetah began TurkeyTail Farm in the foothills of Butte County, California, raising lamb, pork, chicken, duck eggs, gourmet mushrooms and value added herb products.

In 2018 the Camp Fire devastated many communities in Butte County, including the destruction of Paradise. In this fire Cheetah’s home, the farm infrastructure and outbuildings, and water system burned to the ground. Struck by concerns about the toxic debris created by the massive fire, Cheetah launched a non-profit organization called Butte Remediation. Butte Remediation’s mission is twofold: 1) to research and to provide baseline information on fire borne contamination; and 2) to provide no-cost fungal bioremediation services to underserved Camp Fire survivors. Butte Remediation’s ultimate goal is to create open source methods of remediation for future use. Established in 2018 in response to the Camp Fire that ravaged Northern California, Butte Remediation provides support to home and property owners by testing soils for contamination, targeting the contaminants with fungi capable of remediating those toxins, and measuring success with follow-up fungal tissue and soil sampling. On the most basic level this program contributes to understanding the scope and types of contaminants generated by urban firestorms and provides open-source mycoremediation techniques that can be employed to mitigate fallout from future fires. 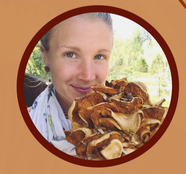 Taylor Bright
CoRenewal Post Fire Biofiltration Initiative Coordinator
Taylor Bright is an applied mycologist, grassroots ecological restoration practitioner, naturalist, educator, writer and artist devoted to the Queendom of fungi and the holistic regeneration of our Living Earth. She holds a BS in Biology and Environmental Science from The University of Central Florida, where she studied plant and soil science in the Universities Arboretum. Taylor has been working as an educator and researcher for CoRenewal for the past 2 years. She also holds an officer position for Bay Area Applied Mycology. She teaches assorted mycology classes and workshops, leads mushroom walks, facilitates and educates at numerous fungus fairs, and is an enthusiastic forager and wild botanical & fungal medicine maker. She also co-owns and operates Moon Fruit Mushroom Farm, a log-cultivation mushroom farm in sonoma county. Her work and focus of interest currently lies in low-tech, low-cost, practical and accessible mycoremediation techniques that can easily be employed in both small and large scale remediation initiatives. She aspires to inspire and liberate others by sharing this knowledge openly as an essential part of the global regenerative movement.

​Taylor is the project coordinator for the Post Fire Biofiltration Initiative, and Study Site Coordinator for two of the initiative’s study sites. She is also a key organizer and researcher in the post-fire restoration efforts of 2020 and 2021. ​ 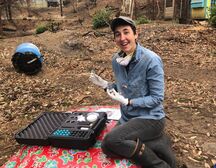 Maya Elson
​CoRenewal Post-fire Biofiltration Manager and Executive Director
Maya Elson is a teacher, naturalist, mycologist, organizer and lover of the wild. Maya has been Executive Director of CoRenewal since 2016, where she is dedicated to enacting effective and just solutions to environmental and social crises by working in collaboration with fungi. She is the co-founder and Program Coordinator of the Post Fire Biofiltration Initiative, an effort and experiment using using fungi to prevent toxins from burned from entering waterways. Maya is one of the founding members of the Radical Mycology network, and has started Applied Mycology groups in Olympia, WA and the San Francisco Bay area. She’s worked as a campaign organizer with a number of climate justice and wilderness defense struggles over many years. Maya is the founder and former Program Coordinator of Wild Child Santa Cruz, a nature immersion program for homeschoolers. She holds a Graduate Certificate in Ecopsychology, and weaves together human and ecological remediation through her work teaching Mycopermaculture, Fungal Biology, Mycorenewal and Mushroom Identification for both adults and children. She also leads mushroom hunts with ForageSF, and rites of passage programs with Gaia Girls Passages, while raising an enchanted child.
​
Maya organized and facilitated CoRenewal’s Fire and Fungi Study Group in 2019, and has been supporting Corenewal’s collaborative research on post-fire ecological regeneration since 2018. During the lightning complex fires of Summer 2020, she founded the Post Fire Biofiltration Initiative, the second ever study to examine the efficacy of fungi in mitigating toxins from burned down homes. She also participated in the post-fire grassroots effort to protect sensitive waterways and reduce erosion in the CZU Lightning Complex Burn Scar as a part of the Post Fire Watershed Defense group.