Fabi is a second year PhD student from California who studies fire and Fungi at the University of California-Riverside under the guidance of Dr. Sydney Glassman. ​

Tell us about your project!
My research is focused on understanding the effects of wildfire on the soil microbial communities of dryland ecosystems with the goal of understand how wildfire affects bacteria and fungi and their post-fire successional dynamics. ​ 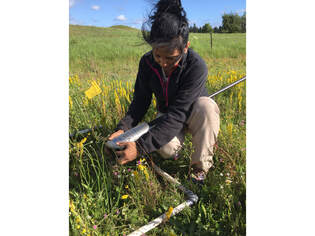 Awards you would like to brag about?
I was honored to have received two awards during my first time attending the annual meeting of the Mycological Society of America, which happened this past August in Minneapolis. I was awarded the Constantine J. Alexopoulos Travel Award for 2019 and I was selected for the Best Graduate Poster Presentation Award at the meeting.

What are your career goals/plans for after you are done with your current position?
I want to remain in academia, so after completing my Ph.D. at UC Riverside- I will be looking for a post-doc position where I can continue to work to understand successional dynamics and functions of fungi, with the final goal of attaining a job as a professor at an R1 institute.

What is your favorite fungus and why?
My love for fungi stemmed from seeing burned forest, the lack of regeneration, and the lack of interest in ectomycorrhizal fungi. Thus, I would have to say that although I love all ectomycorrhizal fungi, my favorite would have to be Wilcoxina (because it was the most abundant in my sites, and has led me to develop some hypotheses, which I will be testing), and Cenococcum, because of the beautiful dark mantle that it produces.

What is your favorite fact/thing about fungi?
That the mycorrhizal network (common mycorrhizal network; CMN) allows trees to “communicate” with one another. For example, if a tree gets infected by a pathogen or, per se, a pine beetle, then that tree will release chemicals which are transferred through the CMN and picked by neighboring trees; thus, allowing surrounding trees to turn on their primary defenses, such as Pathogen Associated Molecular Patterns (PAMPS).

Who is your mycology role model?
I would have to say that my mycology role model is Dr. Joseph Ammirati. He is the type of professor that I aspire to be, because his love for fungi and his love for teaching was apparent in his mycology course at the University of Washington, Seattle (UW). I was fortunate enough to have been able to spend an hour a week with him for an entire year, reading and discussing papers, as well as my career goals. By sharing his life experiences and his knowledge in mycology, he has inspired me to become a mycologist and pass on my love for fungi forward.

Any great stories from field work?
Wow! Do I have stories… Well, during my first week of field work we got stuck. We had been in our site the previous day, but for some reason that road was closed this specific day, so we decide to go in a different way, of course following our GIS map. Unfortunately, this logging road had been built on what appeared to be a temporary stream, which we did not know, until we got stuck. Either way, thanks to the shovel and the trellis, after 3 hours of digging ourselves out, moving a few feet, and getting stuck again, we crafted a “road” made out of rocks, and snags and we managed to get out of there, after 5+ hours. I must say, we were very proud of ourselves.
​
Anything else you would like to talk about?
I love to watch documentaries, so don’t be surprised if we are in the middle of a conversation and you mention something that triggers a “I just watched a documentary on that and….”.  I am also a DACA student, and I have learned not to be ashamed of something that I have no control over, so I have made it a point to help other DACA and minority students navigate academia. If anyone has questions and or needs help applying for grad school, grants (or needs grant resources), etc, feel free to email me (mpuli011@ucr.edu).