A colleague of Mia Maltz from CoRenewal, Sydney studies ectomycorrhizal and other types of fungi, and is interested in understanding the diversity, functioning, and community ecology of microorganisms in a variety of ecosystems particularly post-fire systems. Sydney is an Assistant Professor in the Department of Microbiology and Plant Pathology at the University of California, Riverside. Sydney teaches, mentors students, and emphasizes the importance of fungi in ecosystems. 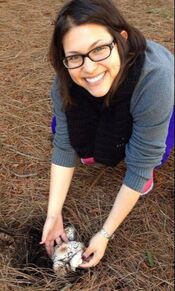 I grew up in LA in the concrete jungle with absolutely no connection to fungi. In my undergrad, I studied abroad in Costa Rica, and we’d go on night hikes. I was drawn more to mushrooms and plants than to the herps we were supposed to be observing. I ended up doing my thesis on arbuscular mycorrhizal fungi in epiphytes in the Costa Rican cloud forest; that’s when I decided that I really wanted to look at fungi specifically. Overall, I am interested in positive (facilitative) interactions among fungi and other organisms.

I knew I wanted to be a professor since the summer after my freshman year of college, when I started working with Brenda Casper at the University of Pennsylvania, and I asked her to be my advisor for my Masters of Environmental Studies. I was motivated to be in the microscope room until 11PM every single day, weekdays and weekends, during my research push, doing spore extractions and staining and getting as much research done as I could to complete my masters in one academic year while I applied for PhD programs.

You started studying contaminated systems very early on. Tell us about that.

For my Masters, we worked at a zinc contaminated Superfund Site in Pennsylvania, which was in the middle of completely denuded mountains across from a zinc smelter. You can clearly see the gradient of contamination. I looked at how bacteria and biotic interactions mediated the effects of arbuscular mycorrhizal fungi on grasses in the low and high contaminated sections of the site.  (Article: Biotic contexts alter metal sequestration and AMF effects on plant growth in soils polluted with heavy metals)

How did the work that you were doing as a student lead to your research on fungi and fire?

Basically when I was conducting research during my PhD, my plots just kept burning down in catastrophic megafires, so I went with it! The first time this happened, I was sampling with the Dimensions of Ectomycorrhizal Biodiversity project, and my plots in Stanislaus National Forest, next to Yosemite, burned in the 2013 Rim Fire. I discovered that one specific ectomycorrhizal fungus (Rhizopogon olivaceotinctus) really increased in frequency after fires in two very different forests. I wanted to learn more about fungal adaptation to fires. (Article: Ectomycorrhizal fungal spore bank recovery after a severe forest fire: some like it hot)
It feels like an important thing to study in California because fires are one of our biggest disturbances and we are limited in what we know about how they affect fungi and how fungi impact ecosystem regeneration trajectories.

Now that you have your own lab, do you have students working on these fire-related research projects?

The second time my dissertation plots burned in a catastrophic megafire was during the 2016 Soberanes Fire. I had been studying the effects of sudden oak death on ectomycorrhizal fungal diversity in those plots. Now, Dylan Enright is studying the impact of that fire on soil bacteria and fungi in redwood tanoak forests https://app.oxfordabstracts.com/events/837/program-app/submission/115877. Fabi [Fabiola Pulido-Chavez: Mycologist Spotlight] is examining bacterial and fungal succession after fires in California chaparral.

Do you identify with ectomycorrhizal fungi as your study system of choice?

I wouldn’t say I’m a one guild gal. I’ve worked with ectomycorrhizal fungi, but I also feel comfortable working with arbuscular mycorrhizal fungi and saprotrophic fungi as well. I prefer working with soil and root-associated fungi; foliar endophytes are really challenging!

Anything you can share about your mentors and what you have gained from working with them?

Both of my mentors, Tom Bruns and Jen Martiny are both very optimistic and encouraging. I aspire to both of their levels of calm.

With Tom, I came in as a field ecologist and I became a mycologist. Tom made a lab flag that said “Mycology without an apology!” Tom is fun and laid back and inspired me not to get so down when things go wrong — which happens all the time in science — but to just go with the flow! Then, with Jen I became a microbiologist. Jen is really great with pep-talks, and I learned how to be a mentor from her: how to get the best work out of your people, make sure they’re happy, and to compartmentalize my personal-life and my science-life in a more balanced way.

Do you have a mentorship philosophy that you apply with your students?

I would say my general philosophy is that I want my people to be happy, and I want to help my students achieve whatever their goals are. I want them to be collaborative and become independent scientists. I have a very comprehensive onboarding document so my students have a clear idea of what I expect from them and what they can get out of their PhD in my lab.
I also try to inspire a healthy, friendly lab culture with things like weekly lab lunches and an annual fungal labs beach party with Jason Stajich.

What hobbies do you have outside of science that have helped strengthen your own personal resilience?

Pre-COVID-19 my two key hobbies were traveling and mushroom hunting. I got really into mushroom hunting and cooking them when I was a TA for the California Mushrooms class at UC Berkeley and blogged about it (http://www.fungifoodie.com/). It was a left-brained activity, and it was also a way to get people excited about forest conservation because most of the really good edibles are only found in old growth forests.

During the quarantine I have adopted 2 rescue dogs: Porcini and Chanterelle aka Chanty. My quarantine hobby has been training my dogs.

Have there been any experiences on your travels that have introduced you to mushrooms in other cultures?

In the jungles of Laos, the Indigenous people knew everything about edible and medicinal mushrooms. The same was true in the Peruvian Amazon. Maybe if I could have a second career I’d be an ethnomycologist and contribute to the preservation of that knowledge!

Another interesting experience was when I went to New Zealand. I was able to recognize most of the mushrooms there because there are so many mushrooms associated with the introduced/invasive Monterey Pine.

What are you currently teaching at UC Riverside?

I developed Field Mycology (MCBL128) from scratch to get students outside to appreciate nature and fungi. It’s a broad course that also covers fungal diversity and fungal impacts on society touching on everything from art, history, food, medicine, poison, insect symbioses, etc.

What is your involvement with the Mycological Society of America (MSA)?

Your Lab Emblem says “The Future is Fungi.” Where did that come from and what does it mean to you?

It’s important to me to proselytize fungi. A lot of students come into this work having no idea how cool, diverse, and important fungi are! They are so critical in the everyday functioning of life and we are just starting to tap into that: decomposition, providing key symbiosis with crops and forests, food processing, pathogens. Now that we have tools to figure it out, there is so much room for discovery.