A colleague and friend of CoRenewal, Tania studies Fungi in areas where our Fire and Fungi research is taking place. She is exploring which Fungi have traits that make them more suitable to withstand inhospitable environments. 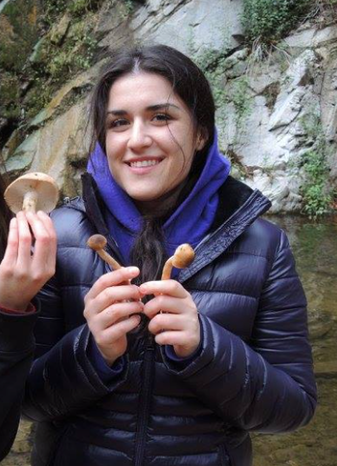 Background
How did you first get introduced to mycology?
When I was younger I would spend my summers in Chisinau, Moldova. My uncle was an avid mushroomer and we would spend time collecting mushrooms together. Years letter I took a fungal ecology class at CSU Northridge, and it reignited my love and fascination for mushrooms. Since then I can’t get enough!

​Do you have any cultural or historical ties to fungi or mushrooms?
Russians and eastern Europeans have a deep cultural tie to finding mushrooms. Anytime I go visit my mother’s side I would eat a variety of different mushroom meals- especially pickled mushrooms made of “Slippery Jacks”. A lot of my childhood revolved around Russian stories of Baba Yaga and other Baltic stories of a “Mother Mushroom”.

At what point did you realize mycology was what you wanted to pursue as a professional career?
My first focus was working with microorganisms. After taking the mycology class I realized how much science has advanced this field. It was during the application season for graduate school that I noticed how many universities have professors that work with fungi and this excited me.

Research
Do you focus on any particular type for your research?
I primarily focus on microfungi. In this case black yeasts or melanized fungi.

What other types of fungi / fungal groups / microbes have you explored?
I’ve worked with bioluminescent filamentous fungi too!

Since scientific research is driven by the funding/support, it sometimes determines a redirection of your work. If money was no object, what would your dream project look like?
I have had a lot of interest in eastern medicine for over ten years now. My mother’s progressive disease had me looking into different regions of the world to try to explain the phenomenon and how people in the past have navigated through it. Obviously new advancements in western medication has since surpassed the medicine offered ten years ago, there is still a lot we don’t know in the western front and the eastern front has been kept secret. There’s also a lot of misconceptions surrounding this knowledge (something that has been harnessed for thousands of years) yet people from the east are still more willing to for a natural cure verses the manmade ones. My opinion is to understand and utilize both. A lot of TCM (Traditional Chinese Medicine) utilizes mushrooms ( Ling Zhi- Reishis, Dong Chong Xia Cao- Cordyceps, Yun Zhi- Turkey Tail, etc.) yet there’s still a lot we don’t understand that is within these common mushrooms. If I had all the money in the world I would have more extensive studies on these fungi. Better analysis of their metabolites will lead to better understanding of these ancient fungi and hopefully better understand of human diseases and responses to fungal secondary metabolites. If Alexander Fleming happened to find Penicillum through his fortuitous fungi handling , a more focused analysis of different medicinal fungi may get us to a better medicinal tools to help mankind.

If it is all conducted in the laboratory, do you think that there are any ecological or societal implication of your work?Chinese medicine collected from deep forests have ecological implications because they are pulled from their local niche which they may be playing a role in. There’s the conversation about mushrooms being the sexual structure of fungi and taking them may not be affecting the ecosystem because of their role. But some do believe that taking them away from their environment is in fact offering ecological harm. Either way these mushrooms also have a very high concentration of heavy metals and may in fact be toxic to human kind. Cultivated fungi may provide with the interface we need to better understand what these fungi are producing to help find substrates that may be beneficial to humankind.

What research are you now conducting in the Stajich lab?
Currently I am looking into studying fungi in Desert Biocrusts. Biocrusts (Biological Soil Crusts) are a complex assemblage of different organisms (cyanobacteria, eukaryotic algae, lichens, bryophytes, bacteria and fungi) that all work together to survive in that environmental niche. There are biocrusts found all over the world in many unusual niches but we have chosen to look into hot desert environments. These desert biocrusts are considered to be the desert’s “living skin” and many National Parks have started to consider this and are conserving their diversity by asking visitors to avoid stepping off the trails. My work looks into a later successional biocrust composed mainly of lichen and cyanobacteria. This cyanolichen crust main lichen species is a Collema sp.which helps us identify the crust when we are looking for more specimens. The general observations for fungi has indicated a variety of resilient Ascomycetes but also a propensity to harbor black yeasts. I have been working on culture dependent and culture independent methods of understanding the fungal diversity of these biocrusts. Using a combination of minimal media and antibiotics we’ve been able to isolate, grow and store these fungi. We’re hoping to understand their function and role in the crusts through a myriad of different metabolomic and flux testing.

Why is this research important to you?
Fungi in these biological soil crusts are resistant to many different stresses such as: UV, high heat, desiccation, high salinity and pH.  There are black yeasts that also infect the human system. Once learning about how these fungi deal with these stresses in desert ecosystems, hopefully we can apply them to the human body.

What sorts of projects do you work on outside of your research at the Stajich Lab?
Nothing scientific. I have more experience with working in organizations. These include AWIS- The Association of Women in Science, Micro-GSA and the Mycological Society of America’s Student Chapter as the Communications chair.

Mentorship
Are you currently a mentor?
Yes! I have different projects I am a part of that allows me to be a mentor! Currently at UCR I have an undergraduate student who works with me on the filamentous fungi found in desert biological soil crusts. We work together on this project and talk about life, her struggles in school and her job interests. I am also part of UCR’s Graduate Student Mentorship Program (a program I was a part of in my first year at UCR) and I have two mentees who are in the computer science program. Though we are in two different programs there is a lot that we are learning from each other.

What qualities do you value in a new mentee?
My two GSMP mentees are actually older than me and there is a lot that I learn from them. What I value is seeing what different backgrounds they are all from and what skills they have acquired throughout their years. One of my mentees is an accomplished sake sommelier, where else would anyone find a person who tastes complexities in sake??

What do you look for when considering taking on an undergraduate research assistant?
In terms of an undergraduate research assistant I enjoy it when they are more organized than me because then we can keep track of each other. I also appreciate them bringing in a fresh perspective. As new students come out of biology classes they may have more skills than I bring- this way their eyes will be more open and be willing to show me something new.

Would you be willing to share anything about your own mentors? What do you admire about them?
I had a wonderful mentor as an undergraduate and Masters student at Cal State Northridge. He was on tenure and wasn’t actively taking students so I was able to have his focus on me. Our relationship was more colleague than student and mentor, we would meet every day and talk about more than just science but also about our lives. He made me appreciate science a lot more- to the point where he suggested I apply to my university. I admire their kindness and generosity.
​
What have you gained from working with your advisor, outside of laboratory and field experience?
After working with my prior mentor- I felt kindness was an important factor for my future advisor. Life is difficult enough and having school add another layer of stress should not be a justification for obtaining a higher degree. After going to conferences with my current advisor I was proud to see how social and active he is in the community. This made me even more committed to be a part of this community in the future.

What has remained inspirational for you about mycology?
Mycology is still a largely unventured territory. We’re all learning along the way and are humbled by its complexity. It inspires me to continue to learn and understand what we can from them.

What do you like to do to support your own personal resilience?
Lots of self-care is very important for me. I also do a lot of crafts which help settle my mind. Netflix helps too.
​
If you had advice to give a budding new mycologist, what would it be?
Stick to your passions, go into the forest to remember why you loved mycology so much. Interacting with other scientists and often will help ground you because it helps you realize that all scientists are just regular people who work hard. If you work hard you can get to the place you hope to be.