Soil pollution with heavy metals is a serious worldwide environmental problem particularly affecting agriculture. The continued increase of heavy metals in soil through industrial emissions, application of biosolids, phosphate fertilizers, and irrigation with wastewater poses a health risk to humans and other living organisms, particularly through the food chain and contaminated drinking water. Metals do not degrade and thus persist and accumulate in soils. Arbuscular mycorrhizal fungi (AMF) are root-associated plant symbionts forming relationships with 90% of all plants and are naturally occurring in almost all habitats and climates, though few persist in industrially impacted soils. AMF reintroduction has been found to improve plant health, reduce synthetic fertilizer and water inputs and increase plant resilience to drought while increasing soil carbon sequestration. Some AMF are adapted to heavy metal toxicity and are promising candidates for applications that not only enhance the phytoremediation of heavy metal contaminated soils, but also inhibit metal uptake into food crops. The mechanisms and environmental parameters through which this occurs are not well understood. Therefore, further research is needed into this potential strategy to address heavy metal contamination before this approach can be widely employed by farmers and practitioners of phytoremediation.

Scientist Spotlight: Danielle Stevenson
​
Danielle Stevenson, a long-time Board member of CoRenewal, founder of DIY Fungi, and Environmental Toxicology Ph.D. Candidate at UC Riverside, is motivated to explore the connection between plant-supporting, root-associated mycorrhizal fungi and metal contaminated “brownfields,” specifically in arid systems. Danielle grew up in Ontario, Canada – in an area considered a “cancer alley” – and as a small child, identified this link between human health and environmental pollution. As she observed and interacted with her environment, she was inspired by seeing plants, like sumac and poplars, and mushrooms – such as the charismatic shaggy mane mushroom – growing through asphalt near an oil refinery. From the outdoor mud kitchen and lab in her closet for ‘solving world problems’ to the hi-tech environmental science lab where she currently works, Danielle was always seeking out ways to test the soil and looking to nature for some of these remedies. This, in part, was the impetus for her bioremediation work: investigating how plants, microbes, and fungi can (1) biodegrade contaminants by viewing them as food sources or (2) extract toxic metals from severely contaminated soil.

Similarly, Danielle leverages the power of the plant-microbial symbiosis to determine whether mycorrhizal fungi serve as gatekeepers that inhibit – or enhance – the uptake of toxic metals. Danielle explains that, in her work, context is incredibly important. When contaminated land is laying fallow, as a superfund or brownfield site, then we may want to add in microbes, such as mycorrhizal fungi, that promote “reverse-mining” of contaminants and toxic metals from the land. Elements, such as metals, are non-biodegradable; therefore, they move into soil food webs and are translocated through filamentous strands of fungal cells (i.e., hyphae) into hyphal networks of fungal tissues (i.e., mycelium) and then to the root zone (i.e., rhizosphere), where they may be incorporated into their plant host, roots, leaves, or fruits. This extractive process is known as myco-phytoextraction. However, in some contexts, it may not necessarily be beneficial to promote this phyto-extractive process. In some instances, contaminated land is slated for development and green space planning includes recreation or food production in urban farms or community gardens. In these contexts, we may want to ally with microbes to inhibit the uptake of toxic metals into plant or fungal tissues, as opposed to enhancing this process.

In specific cases with food crops, plant-supporting mycorrhizal fungi may be coaxed to retain metals within their mycelium, rather than transfer these elements to their host plant for storage in either edible or non-edible plant tissues. Danielle’s innovative work reveals whether fungi that live in plant roots have the capacity to absorb or retain metals in their tissue or if fungi transport these metals into the edible portion of food crops, which would have toxic implications for human consumption. Findings from her studies provide evidence about how fungi affect where metals ultimately travel in a plant and how we can leverage fungal processes to reduce these impacts and support food security.

Within a municipal scale project with the City of Los Angeles, the Department of Toxic Substances Control, neighborhood council groups, community groups and other collaborators or regulators of brownfields in California, Danielle has been working to scale up approaches, which have previously shown promise at smaller scales. Taking a biological approach to remediation (i.e., bioremediation), she translates the findings from her experiment into practice. Moreover, she communicates with policy makers and governmental representatives to set precedents and explore applications for her work with fungi and environmental toxicology. First, she looks to identify which microbes are volunteering and showing up on contaminated sites on their own. These species are often considered pioneer species, as they brave inhospitable terrain and essentially pave the way for ecological succession as they enhance the viability of severely contaminated landscapes. Once she identifies and documents these native or extant species, which seem to be capable of growing on site, then she assesses their capacity for tolerating or addressing contaminants that are present in the site. Finally, she investigates mechanisms to learn more about their processes and interactions to consider various ways to accelerate, support, or enhance what these microbial volunteers could be doing in restoring the degraded site and compare enhancing volunteer species with introducing known remediators.

In this work, Danielle experiments with microbial inoculation and phytoextraction throughout contaminated sites that have been sitting for decades. If remediation of these sites is not able to happen on site (i.e., in situ), then there are incredibly high costs and environmental impacts for conventional ex situ clean up methodologies, which may include excavating these soils, shipping them across state lines, and then bringing in clean soils to cap the remnant brownfield. Therefore, it may be more energy efficient to clean up these contaminated sites in situ, with ecologically-sound approaches to either adding in microbes or by manipulating edaphic features of the soil, than to haul soil off site for ex situ microbial processing.

Bioaugmentation requires adding in microbes to contaminated media and has been explored for in situ field experiments and ex situ mesocosm, greenhouse, or microcosm experiments. These inocula sources could be native microbes from reference intact ecosystems, commercially available inoculum, single species which might help to support a desired function, or spent spawn, which is a by-product of mushroom cultivation and often can be available in large quantities and discarded by mushroom farms in big heaps and truckloads. Danielle, and other practitioners of bioremediation, recognize that these organic waste streams can be present in large amounts in the city and can be applied to help with the remediation of soils. In lieu of adding inoculum, you could stimulate native soil microbial communities to proliferate by adding in biostimulants, such as kelp and seaweed or molasses-based amendments. In biostimulation, you are adding food sources to promote microbial growth, reproduction, and metabolism. 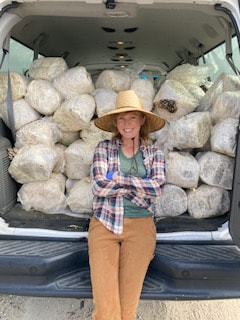